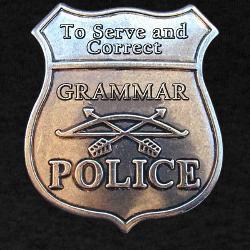 When I recently told an acquaintance that I study and teach in a Department of English Language & Literature, they commented that I must be a real stickler for grammar and vocabulary. In some ways, that’s true. Part of my job is to teach my students to write well and to communicate their ideas effectively. The truth is, however, that I’m much less interested in perfect grammar and spelling than I am in whether or not an idea or argument is conveyed as unambiguously and clearly as possible (especially in academic writing!). After all, even in my own academic and personal writing, I often flout the usual rules or expected usages of grammar. I often start sentences with coordinating conjunctions such as “and” or “but.” I don’t always use semi-colons or dashes properly (although I do try). Ultimately, however, the goal of my writing – and the ways in which I teach my students to write – is to make sure that as much as you can, you try to make sure that your audience knows exactly what you mean to say.

Sometimes, part of clear and unambiguous communication does indeed have to do with grammar, as this wonderful and popular example illustrates.

Sometimes, part of clear and unambiguous communication has to do with sentence structure and phrasing. It’s this type of issue, I believe, that lies behind the issues with a recent campaign by Vancouver’s Transit Police, as part of their ongoing series of campaigns and services designed to address harassment on public transportation. As you can see in this photograph, the poster suggests that “not reporting sexual assault is the real shame” – a phrase which seems to suggest that a failure to report assault is a primary source of shame.

Vancouver-based artist Anoushka Ratnarajah brought attention to the problems with the poster’s message via an Instagram post, and the story was soon picked up by Ms. Magazine, The Huffington Post, and various other news outlets. The Vancouver chapter of Hollaback!, an international organization dedicated to ending street harassment, issued a powerful statement to the Vancouver Transit Police. Playing on the phrasing of the poster itself, Hollaback! Vancouver’s response was that “we see something, and we’re saying something.” In the end, the Vancouver Transit Police issued an apology: as the CBC reports, they will be taking these posters down, and replacing them.

As was to be expected, perhaps, many of the commenters on social media have painted this pushback against the poster as just another example of “oversensitive feminazi crusading,” arguing that we live in a oversensitive and critical culture where even good-hearted gestures by authorities are being overly-harshly criticized. Just like the recent debates about whether or not so-called “trigger warnings” are useful or necessary, especially in a world where triggers and violence abounds anyway, it seems to be the case that those who have complained or criticized (many of whom are survivors of sexual assault and harassment, including incidents which have taken place on transit) are being characterized as merely reactionary, ungrateful, or sensitive.

To be clear, many of these commenters are missing the point, or choosing to ignore the ways in which activists have suggested that it is not the entirety of the poster, nor all of the Vancouver Transit Police’s initiatives that they take issue with. As Hollaback! Vancouver clearly states: “This is the text from a See Something Say Something Campaign, the real-time, easy-to-use, confidential, texting initiative launched in April by the Vancouver transit police. Transit users can report harassment by texting 87-77-77 and police are notified and can investigate as early as the next stop. This initiative is an important piece in supporting victims, but we hope transit police will reconsider the victim-blaming message sandwiched in their ad.”

More importantly, I think that many people are missing the fundamental problem: despite the VTP’s intentions, the ad is clearly not…well, clear. A very brief close reading – the kind I’d have my students do in my classroom – shows just how these ambiguities work, and how/why the critiques of this poster were justified.

The advertisement seems to be targeting both victims and bystanders, and does not necessarily make it easy to understand who is being addressed. While “if it doesn’t feel right, it’s wrong” can apply equally to victims and bystanders, the third line seems to focus primarily on the victim: “nobody should touch, gesture, or say anything to YOU.” The last line, the “see something / say something” slogan, seems to suggest that the bystander (the person who may be witnessing an assault or instance of harassment) is being addressed.

2) What is the source of shame? Who is it placed on?

Because there are two different audiences being addressed, it becomes confusing as to who, exactly, the shame is meant to be placed on.

I hope it’s evident, at this point, that you can unpack a lot of issues with audience and intended meaning just from one short phrase. That, after all, is the power of language: a lot can be said with very few words. The next step, however, is to figure out how this poster can avoid some of these communicative problems.

3) A simple question: how can we modify or re-write this phrase in order to have a less ambiguous and potentially harmful meaning?

A simple suggestion: “There is no shame in reporting sexual assault.”

As you can see, we haven’t taken shame out of the linguistic equation. We’ve simply rearranged it. After all, the problem isn’t using the word “shame”. Rather, it’s how, when, why, and where we use it. Articulating the fact that victims of sexual assault or harassment often feel shame is incredibly important to acknowledge. When it comes to street harassment, or incidents that are often perceived as “minor,” it’s easy for victims to feel ashamed, to worry that they won’t be taken seriously, to wonder if they provoked it. Shame and sexual violence too-often go hand in hand. As you can see, if you read through many of the stories collected by the Vancouver initiative “Harassment on Translink,” feelings of shame and guilt still abound.

It’s our job (all of us, including the authorities) to make an effort to make sure that we are recognizing the possible experience of shame, rather than suggesting (even inadvertently), that sexual assault survivors should feel a sense of shame for their inaction. We all want sexual assault and harassment to end, and we acknowledge that reporting can be, and clearly is, a part of that effort.

But I cannot say it enough: reporting sexual assault is NOT a victim’s DUTY. It is one option, and it is the absolute right of the survivor to choose whichever option is safest and best for them. It is all too easy for those who have never had to report, or for whom reporting may have been relatively easy and/or offered justice/healing, that it is a simple and necessary task.

Ultimately, what I take away from this incident is a difficult truth: despite the fact that we use it every single day—no matter which language we speak, read, or sign— language is a very tricky business. Whether it be from one language to another, whether it be from one context to another, whether it be from the way we understand something to the ways that others read, hear, or interpret it, we have all been in situations where our words have missed their mark. We all know what it’s like for something to get lost in translation. Sometimes, of course, we don’t realize it until someone’s pointed it out to us.

When we call others out for their use of language (whether their words are explicitly or implicitly harmful), many of us do it because we believe that change can happen. We believe that we can help to educate, to re-frame, or to re-think through a particular problem in how ideas are expressed. As the CBC’s interview with Constable Anne Drennan notes, this is precisely the outcome of the critiques and feedback that individuals and organizations offered:

“When the complaints began to arrive, they started looking at the ads from a different perspective, Drennan says.

“We [could] see where they are coming from,” she says.

The ads will be taken down over the coming days as cars return to service yards, Drennan says, and will be replaced by new posters with wording approved by an advisory council that includes representatives from women’s support groups. (CBC)

The old adage that “sticks and stones can break our bones, but words will never hurt us” is, as most of us know, patently untrue. We know the degree of injury can vary, depending on the language used, and depending on the individual who reads or sees the language in question. We know that our “intended” meanings may not necessarily be the received meanings, and it’s important to recognize that good intentions do not devalue or cancel out the harm that can be done. However, I firmly believe that with a greater understanding of the immense power of language (as well as the ability to speak and write about, well, how we speak and write!) we can use our words for great acts of compassion, education, and justice.

If you have a story to share about harassment/need resources: